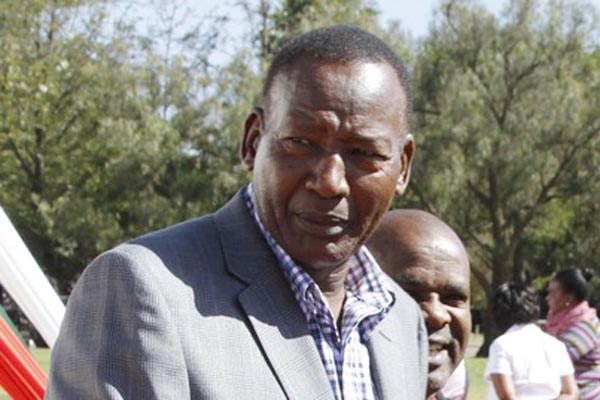 Interior Cabinet Secretary Joseph Nkaissery minced no words yesterday declaring that opposition’s National Super Alliance (NASA) coalition will not be setting up a parallel vote-tallying center during the August 8 polls.

The fiery CS said that under no circumstances will he allow NASA to proceed with their intentions as long as he is in charge of the national security.

He said that the Independent Electoral and Boundaries Commission (IEBC) is the only institution that is mandated with running elections in Kenya and will be the only ones setting up a vote tallying center.

Nkaissery was reacting to Raila’s statements saying that NASA was going to set up their own tallying center to compare results released by the IEBC.

The cabinet secretary commended IEBC Chairman Wafula Chebukati for recognizing that the constitution does not allow the setting up of  parallel tallying center and that only IEBC is mandated to do so.

“I want to congratulate Chebukati for putting off those people intending to conduct parallel tallying center,” he said.

The interior CS was speaking at a Jubilee campaign event at Oloitikosh-Kiserian in Kajiado West.

He defended his fellow colleagues on claims that they should not be participating in election campaigns saying that cabinet secretaries are appointed directly by the president hence they have a right to campaign on behalf of the government.

Ex-CS Waiguru: They framed me in NYS scandal to serve Raila’s interests

After dancing for Uhuru, Nyeri women camp in the cold as they demand payment

Four Muslim countries cut ties with Qatar over its support for…